Get on the path to a straighter smile today!*

What is the difference between snoring and having sleep apnea? 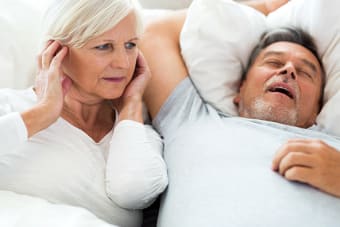 It's not unusual for those who suffer from sleep apnea to believe they are just snoring. Many people are actually unaware that they have sleep apnea.

Both snoring and sleep apnea are related to breathing problems during sleep, may be connected to other health issues, and both can disrupt proper sleep patterns.

However, while there are similarities there are also some important distinctions between these issues.

When obstructed air movement causes vibrations in the respiratory structures, while a person is sleeping, we call the vibrations snoring. Some of the most common causes of an airway obstruction include: an elongated soft palate, a large tongue, the uvula, and nasal obstructions.

Snoring is a common symptom of sleep apnea but not everyone who has sleep apnea will necessarily snore.

Characterized by abnormal pauses in breathing or shallow breathing during sleep, sleep apnea is a serious condition. These pauses in breathing are called apneas and can happen for a few reasons; a physical blockage to airflow, a lack of respiratory effort, or a combination of the both.

Obstructive sleep apnea (OSA) is the most common form of sleep apneas and is caused by a blockage of the airway.

Those who suffer from sleep apnea are often unaware that they have the condition until their sleep partner brings attention to the symptoms that they are noticing.

Because sleep apnea has significant negative effects on sleep quality, those who suffer from sleep apnea often feel fatigued and sleepy throughout the day. In turn, fatigue can have some very negative impacts work performance, general alertness, and overall motivation when dealing with everyday routines and schedules.

Sleep apnea can only be diagnosed by a medical professional. If you think you may be suffering from sleep apnea it is important undergo an assessment and receive appropriate treatment as soon as possible.

If you suspect you may be suffering from sleep apnea, contact your Langley dentist today to book a consultation.

Get on the path to a brighter, healthier smile today!